Tales From the Registry

Personal narratives by people who have been harmed by oppressive sex offender registries.

Tales From the Registry

Posted on December 17, 2018 26 Comments on Update on travel experience

I want to give an update and recap of my international travel this year. In February/March this year I travelled to Bosnia-Herzegovina, Croatia, and Turkey. I had no issues leaving the United States and no issues entering Bosnia. I did have a bit of a scare at the Bosnian-Croatian border. I drove out of Bosnia and was stopped by the Bosnian border patrol for about 15 to 20 minutes. I know my RSO issue was holding things up and I think they had no idea what to do with me. But eventually they released me and I was able to enter Croatia. I later entered Turkey with no issues.
I then returned back to the United States in the summer of this year. I had a quick stop over in Germany and that is a great place to have a stopover. I actually had to go through passport control to re-check my bags on another airline and was given no hassle what-so-ever. When I re-entered the United States, I went to the passport kiosk, scanned my passport and noticed that I have a large black “X” over my picture. Obviously, this means I was “flagged” for a second screening. The immigration officer was very polite and discreet. He asked me to come to a holding room with my wife and daughter. We waited about 10 to 15 minutes and then an immigration officer interviewed me. She asked basic questions. Did you bring anything illegal in? Did you bring in more than $10K? What was the purpose of your travel? She did ask one odd question. She asked, “Have you gained citizenship in any other country while abroad?” I thought that question was odd. But that was it. I was on my way after that, so pretty harmless re-entry into the United States.
This fall I returned back to Turkey. Leaving the United States was no issue. However, because of cheap airline ticket prices I chose to fly through Gatwick, London International Airport. My wife and I arrived at Gatwick and we only had a two- and half-hour layover until our next flight took off. I had to go through passport control, because I had to re-check my bags on a connecting flight. I walk up to the passport window and the fellow was polite as the English can be. He scanned my passport, looked at me, scanned it again. Looked at me and said he needed to speak with his supervisor. He comes back and starts writing on a piece of paper, then hands me the paper (see attachment). I was being detained for additional screening. He then politely guides me to a glass encaged cubicle directly next to passport control. He then asks where my destination is and how long I plan on staying in England. I show him my tickets and explain that I have a flight leaving in two hours. I still need to run, re-check my bags, and find my gate. I have no intention of staying in England for any amount of time. He politely nods and then confers with his supervisor. After about 30 minutes he returns with a smile and says, “ok, you are cleared to go”. I was very relieved. I looked at my passport and it was stamped for a 48 hour entry (See attached photo). We then ran to re-check our bags and catch our next flight. I had no problems entering Turkey. They are the friendliest of people even at the customs desk.

Lessons Learned:
1. Don’t give more than 21 days’ notice to your local law enforcement agency. You have to remember that when you give notification your local law enforcement notifies the Marshal’s Office. Then they notify the State Dept, Angel Watch, and InterPOL. These folks then notify the law enforcement and State Dept of the governments to the countries you want to travel to. Once they receive notification they have to update their databases. Bottomline, is all this is time consuming. The more time you give them, the more time they have to update their database. The law says “at least 21 days notice”, that’s all you want to give them.
2. Don’t talk about your offense. Don’t feel like you need to contact the country you want to visit and tell them about your situation, you don’t, so don’t! Don’t contact the State Dept and tell them about your situation and feel like you need a scarlet letter passport. Trust me, the State Dept will notify you by certified mail that your passport has been revoked. Don’t tell your local law officer about exactly where you are going, what you are doing, how much fun you are going to have, etc. It’s none of their business. Formally inform them on paper exactly what International Megan’s Law (IML) requires and get a copy for yourself to take on the trip. You may need it when you return to the states to prove you provided notice to the govt.
3. Plan your trip carefully. I was trying to get through England on a layover because it was cheap. That could have been a fatal mistake if they had denied me entry. But these tickets were extremely cheap and I was just curious if I could get through England after everything I heard online. You need to do your homework and figure out if the country you want to travel to will allow RSOs. If they don’t and you really, really want/have to go to that country, then you need to look at alternate routes. Flying into a country is the worst way, because you are screened like crazy and they have the best data bases. Remember there are other methods of travel. Car, bus, boat, trains, walking/hiking. I personally know RSOs that have traveled to Mexico by walking across the border. Once you are over the border, then just take a plane, train, or bus wherever you are going. Let’s say you can’t walk. Like you want to go to Korea. Go to a country nearby that allows RSOs, then take a ferry boat, train, or bus into the country you want to go into. You will have to be creative if you want to travel sometimes.
4. Don’t travel alone. I think when border agents see I’m with my wife they relax a bit. I’m not seen as a threat, because I’m not, never have been. But that is a story for another day.
5. Finally, if you are ever denied entry into a country, you need to make a stink about it. Write your Congressman and Senator, write the president, fill out a complaint to the UN about human rights violations. https://www.ohchr.org/en/hrbodies/hrc/complaintprocedure/pages/hrccomplaintprocedureindex.aspx

Do not make denial of entry easy on these people. They will just keep passing shitty laws if we don’t make a stink about the shitty laws they have already passed.

If you have any questions about my post, please feel free to ask. I have visited five countries so far since being an RSO, I hope to do plenty more traveling. Before being on the RSO I have visited over 15 countries, so I’m a pretty well experienced traveler. 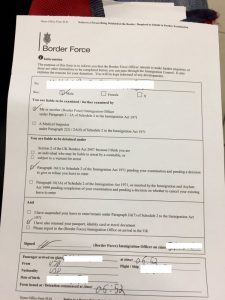 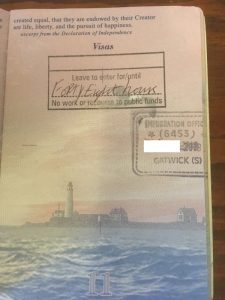 26 thoughts on “Update on travel experience”

Copyright © 2022 Tales From the Registry